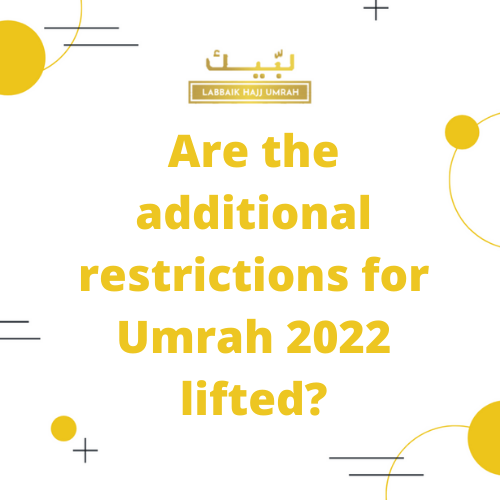 Yes, additional restrictions for Umrah are over from March 6 2022. Today, locals and foreign Muslims can easily travel ahead to their sacred sites including Al-Haram & Al-Nabawi mosques. Now, this step taken by the Saudi Government is to make it facilitate for a large number of foreigners (Muslims) to perform their religious duties.

The Kingdom is the only hub in the world where Muslims can make themselves look like newborns. Hear the newborn refers to exempting completely from sins. And all of this will be happened after performing Hajj and Umrah.

Muslims had been deprived of the great sunnah of their beloved Prophet (Peace Be Upon Him) for the last two years. But this deprivation has turned into privileged. After the announcement that the past restrictions imposed on Umrah have been lifted. Both the cities are again going to fill up with the Umrah pilgrims.

The Ministry of Hajj and Umrah has made some concessions in performing Umrah from the beginning of 2022. It abolished the age limit of 12 to 50 years for Umrah travellers. Therefore, everyone will be able to perform Umrah. Muslims can offer prayers in both Grand Mosques but through an electronic permit. Foreign Muslim families can come to Saudi Arabia for leisure and religious activities. They can perform Umrah with less than12 years old children. They can perform Umrah while touching Maqam e Ibrahim, Hajre Aswad, and also enter the Hateem area.

What additional restrictions on Umrah have been lifted?

Saudi Arabia has lifted all additional restrictions for the past two years from March 6, 2022.

Saudi Arabia last days suspended Umrah for some 17 countries due to an increase in the number of Omicron patients. The names of countries are:

Are there any additional restrictions for Umrah right now?

Yes, there are some additional restrictions for Umrah right now. They can perform Umrah and visit Rawdah without getting permits on Tawakkalna & Etmarna Apps. Rawdah is a tomb of Prophet (Peace Be Upon Him) and his two Companions-Abu Bakr (R. A.) & Umar Farooq (R.A.) where all are resting.

Under 12 years kids can’t perform Umrah in the last month, but maybe this restriction has also been lifted in future. According to a survey report, Saudi Arabia has gained pace in immunizing children between 5 to 11 years campaign. And soon it will start an immunizing campaign for under five years old children. Muslims will require to wear facemask indoor mosques and during Umrah. Travellers still need to have medical insurance to cover COVID-19 related treatment costs.

The age limit for children has been lifted following a new update from the ministry. Now a woman doesn’t need a Mahram if her age is under 45 years but she will still need to accompany an organized group on the journey of Umrah.

What are the rules of Umrah for a Muslim?

A Muslim can perform Umrah after taking advance precautions whether he belongs to Asia or Europe. These precautions are the same for all. All foreigners will need a certificate of immunization against COVID 19. They will submit their immune status to get permission of going on Umrah and Rawdah. Muslims should wear facemasks during offering prayers and performing Umrah because now social distance has ended.

Saudi Government has ended the institutional quarantine, but pilgrims must visit care centres in Makkah before performing Umrah. Here they will get bracelets. These bracelets work like GPS, which tell authorities immune status and locations.

Now Muslims can turn to their second Umrah without waiting for 10 days. Now the ministry has increased the duration of Umrah from 8 to 12 in one day.

Simply put, all foreign Muslims require to install Etmarana App in their mobiles.

Try to register yourself on Etmarana Apps. Taking the help in the registration of any person is good. But don’t fill out any bogus forms.

If you plan to perform Umrah this month, but the second dose of Corona Vaccine has been over eight months, don’t think too much about the booster job. Now people who have not been vaccinated will also be able to perform Umrah. Have you any questions regarding Umrah updates or the Umrah package? Then contact us. Because we are experts and we are serving our best Umrah Packages and Hajj Packages service from 9 years in the UK travel industry.