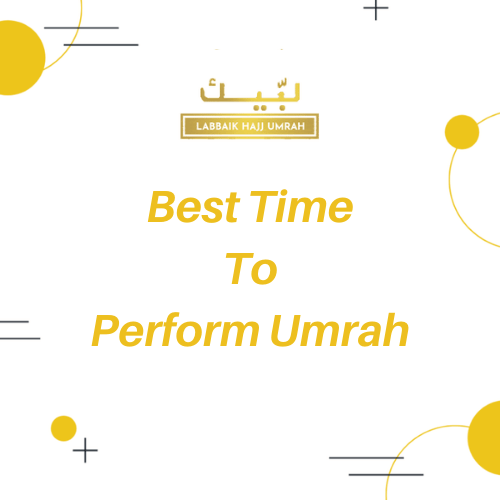 Finding Best Time to perform Umrah may vary for each of us. We have faced four seasons in one year in Saudi Arabia. Most Arabian countries have a desert climate that is different to the European climate. So, to get the right answer at the best time for Umrah, people will need some time until they read it completely.

(Best Time to Perform Umrah) the topic is divided into three sections which detail given below.

This means summers are hot & dry and on the other hand winters are mild. We don’t expect rain to fall much, but it happens when temperatures fall. So we should know “What is the Best Season for Umrah“, so that, we choose the right moment to do our religious journey.

We face four seasons in one year:

Summer falls in the three months of June, July and August respectively. The temperature goes up to 115°F in a day, but it falls at the night. Don’t people in the UK experience such hot temperatures because the daytime temperatures there reach a maximum of 89.6 F?

If one suggests performing Umrah during this season, one should first decide whether it is the right time to perform one’s religious duty or not. Saudi Arabia opened the gates of the Kingdom for tourism. The United Kingdom is one of the countries whose inhabitants have this lucky opportunity to see the mysterious land of the Middle East country, whose history is centuries old.

So, exploring the historic valleys is not the right time in summer, but there is no issue to perform Umrah. Because all the rituals of Umrah are performed in Masjid-ul-Haram. But it is a bit difficult to visit, the reason being that not all Ziyarat places are equipped with modern facilities, as you can find in the hotels and Masjid Al Haram & Masjid Nabavi.

Almost December and January are both the top winter months. These are the two peak months of the winter season in Saudi Arabia. February is also a winter month, but it is less cool than Dec & Jan.

Always remember, never imagine here high snow falling and heavy rainfalls. The average daytime temperature of December can be up to 68°F.  But January is the coldest month, and the monthly temperature may be about 46F. February is called the rainiest month. In the winter season, snowfall can be experienced on Mounts Tabuk, Jabal al-Lawz, and Jiraz.

December is considered a peak season due to Christmas & New Year holidays. Everyone tries to get a December Umrah package because there is no cold winter like in the UK. In the Daytime, Muslims can easily do Ziyarat in a pleasant atmosphere. Without the pressure of job and business, performing Umrah may be a remarkable journey for your lifetime.

It would not be wrong to say that December is a golden opportunity for all travellers to discover the mysterious land.

Spring is a short season that passes quickly. It depends on March and April. Temperature sharply rises day by day in this month because the hottest months are still ahead. Daytime temperature is about 80°F –90°F. But nights temperature is low than daytime.

Tips: So you will need to bring some extra clothes to warm up on the spring nights

So a family consists of a couple and children. If the couple goes on Umrah alone without taking their children because their study will disturb then never hesitate or miss the spring season do yours with family. Including all weather conditions, this season is best for Umrah. And doing Umrah in the Easter holidays will be a little costly because it is another holy event after Christmas for European inhabitants.

Mostly summer vacations and Easter holidays come together in April. School vacation starts in April, and Easter comes in March or April (Easter event dates consists of the Georgian calendar). Performing Umrah with family is a great job vs alone.

Interesting Topic to know about “Why should we go for the Easter holidays 2022 to perform Umrah?”

The autumn season is midway between the summer and winter seasons. Therefore we can say it is not hot or nor cool. September, October, and November are three months of spring. But the climate of September is like May. You could say that in early October, the weather starts to calm down to some extent (in terms of hot).

The average temperature goes up to about 86°F, while above 100°F is in summer. November is cooler than either. The daytime temperature range goes between 73°F –79°F. If you have time, there is no perfect month to perform ‘Umrah except November, because this month is neither cold nor hot.

Getting complete “How to perform Umrah” information will help you understand what is best for you.

Ramadan is the 9th month of the Islamic lunar calendar and is a holy month for Muslims because Allah gives a 10th times reward instead of one good deed. So Muslims try more and more good deeds to earn more rewards as Allah promises in Quran. There are many aspects about the best month of Ramadan. In short terms, Allah says about this specific month that this is my month.

There are two main extra worships in this holy month; Trabeeh and Itakaaf. Ramadan consists of three stages. So, Ramadan is the peak season of the year because performing each worship in Al–Haram & Al Nabavi is a dream of each person. Due to much cost of Umrah Packages, people select another time to do Umrah in this blessed month.

Tips: BY Advanced booking, Ramadan Umrah packages can be availed at cheap rates

According to the meaning of Hadith, performing Umrah in Ramadan will be equal to the Hajj in terms of reward. So, none of us misses this chance.

It is an annual pilgrimage where Muslims pass their own five days in selected areas for Hajj. They travel and do some activities these days.

Muslims can perform Umrah with Hajj al Qiran and Hajj al Tamattu types, and they can’t perform Umrah with Hajj al-Ifrad. So this Islamic event consists of five days of the last lunar month Dhul Hijah. The dates of fixed 5 days change every year because our social system follows the Gregorian calendar. The lunar calendar days are short than a Gregorian calendar. So the days of Hajj change every year.

Sometimes Hajj event comes in summer or winter, and spring or autumn. Due to the Quota system, each of us couldn’t perform Hajj because it comes once a time in a year rather Umrah can be performed at any time of year except for fixed five days. Not all Muslims may perform the annual pilgrimage at the same time.

To know complete information: What is Hajj and How can perform Umrah with Hajj

The best time to visit Makkah for Umrah or the Best time to perform Umrah is a critical question. People are forced to think about the best time. Our personal opinion is every time is perfect if you are physically and financially fit. If one has extra money and he/she doesn’t prefer to spend it in way of Allah, then he/she doesn’t accept an order from Allah.

Ramadan is a month that consists of 29 or 30 days and Hajj consists of 5 days. Both sacred events dates are changed every year automatically. Never leave his best chance to perform Umrah in both events due to seasonal conditions. Undoubtedly the change of weather and its severity affect every journey, but every step taken for Umrah leads to great reward. Before booking their Umrah Package, Muslims should think that they are going to meet the Creator of the universe (Allah), not a relative, as a guest in Saudi Arabia.