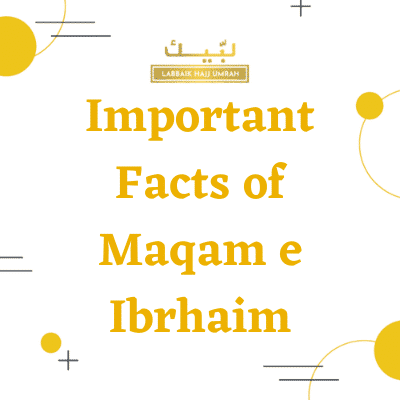 Why is it obligatory to offer two rakats of prayers after Tawaf, but before the ritual of Sa’i? What is the history and purpose of Maqam e Ibrahim? You will find all the answers to these questions after reading the “Important Facts of Maqam e Ibrahim” of this article.

Maqam is an Arabic word which means “a place or point where the feet of a person is placed while standing”. Ibrahim was a Prophet of Allah whose title was Khalil-ul-Allah. Maqam e Ibrahim or Maqam Ibrahim is also known as the “Station of Ibrahim”.

The Prophet Muhammad (Peace Be Upon Him) stated:

“The stone is the station of Ibrahim. Allah made it soft and made it mercy. Ibrahim (RA) would stand on it, and Ismail (RA) would hand the stones up to him.”

Seeing this place is a spiritual moment for Muslims like the other holy places whether they are coming at this place during the Umrah and Hajj or any other reason.

According to Islamic traditions, the first time the Kaabah was built by Adam (AS). The building of the Kaaba was badly affected during the flood in the time of Noah (AS). After a long time, Allah again ordered both of his prophets to build the Kaaba and the names of these prophets were Ibrahim (AS) and Ismail (AS).

At the time of construction, five types of mountain stones were used for the construction of the Kaaba and name of them are Hira, Thubay, Labanan, Toor and Jabal Al Khayr.

A special Stone was used for the construction of the Kaaba, called Maqam e Ibrahim. Muslims believe that three stones came from Heaven, one of Hajr e Aswad, the other is the rock of Israel, and the third is Maqame Ibrahim.

What is the purpose of Maqam e Ibrahim?

It is one of the miracles of the Prophet Ibrahim (AS) which was sent from heaven only for him. And stone used to be soft when Ibrahim (A.S) used it for standing and thereby his feet dived into the stone.

According to some, when the building of Kaaba completed, Allah commanded His Prophet Ibrahim (AS), to call people to the pilgrimage (Hajj). At the time of calling, Hazrat Ibrahim (AS) stood on this stone, and his footprint remained on it.

Therefore also today we can see his feet’s impression on this stone as seen centuries ago. After completing its construction, the large stone was left outside the Kaaba.

The concept of stone was softened when Abraham stood on it, even if the Kaaba was built or to call the people for Hajj is true.

Maqam e Ibrahim was situated near the wall of Kaaba as it is mentioned in the Holy Quran. Its position was changed in the time of Second Caliph Umar Farooq (RA).

Umra bin Khattab (RA) reports that Allah Almighty fulfilled three wishes that he had. One of these (wishes) was his proposal to the Prophet (PBUH) that the Maqam-e-Ibrahim should be made a place for performing prayer.

Allah (SWT.) revealed the following verse no. 125 of Surah al-Baqarah in the Holy Quran:

At the time of Ibrahim, the Maqam was attached to the Kaaba. In the reign of 2nd Caliph- Umar (RA) changed the old position of stone to make it easier for doing Tawaf and offering prayer. All the Sahabah accepted this act because he was Umar who had suggested it should be taken as a place of prayer.

So, he changed the place of rock and moved the Maqam more towards the east. Therefore today the Maqam e Ibrahim is found in front of the entryway of the Kaaba.

What is the size & shape of the Maqam e Ibrahim?

The height of Maqam e Ibrahim is 20 cm, and the shape of the stone is square having 40 cm2 x 40 cm2. This stone colour is yellowish and reddish white. On this stone, the depth of one footprint is 10 cm, and the second is 9 cm.

It is a small & round shaped stone place over 20 centimetres of marble. Presently, the length of footprints have decreased from 22 inches to 27 cm and while width has left 11 inches to from 14 cm. Distance between the two footprints is about 1 cm.

The dome of it was first time constructed in 810 Hijri, and it has been building from time to time. Before 1967 there was a room for Maqame Ibrahim, but now it is enclosed in a gold case.

What to do at Maqam e Ibrahim?

During the Hajj and Umrah, pilgrims have only one desire to offer the two rakats of prayer behind the Maqam Ibrahim. Offering prayer is compulsory to complete the ritual of Tawaf; otherwise, Tawaf is not completed.

It is not mandatory to offer Salah in front of Maqam Ibrahim because due to crowd of pilgrims, it can be offered at any place of Masjid al-Haram.

According to some scholars, If a person forgets to perform 2 nafls in the Al-Haram Mosque, then he can offer it at another place which may be far away from the Holy Mosque and those scholars give an example of Hazrat Umar (RA) in this matter that he prayed the two rakats of Tawaf in Dhu Tuwa.

This place (Dhu Tuwa) is far away from the Masjid e Haram.

Note: We should follow this way in which the majority of scholars have believed.