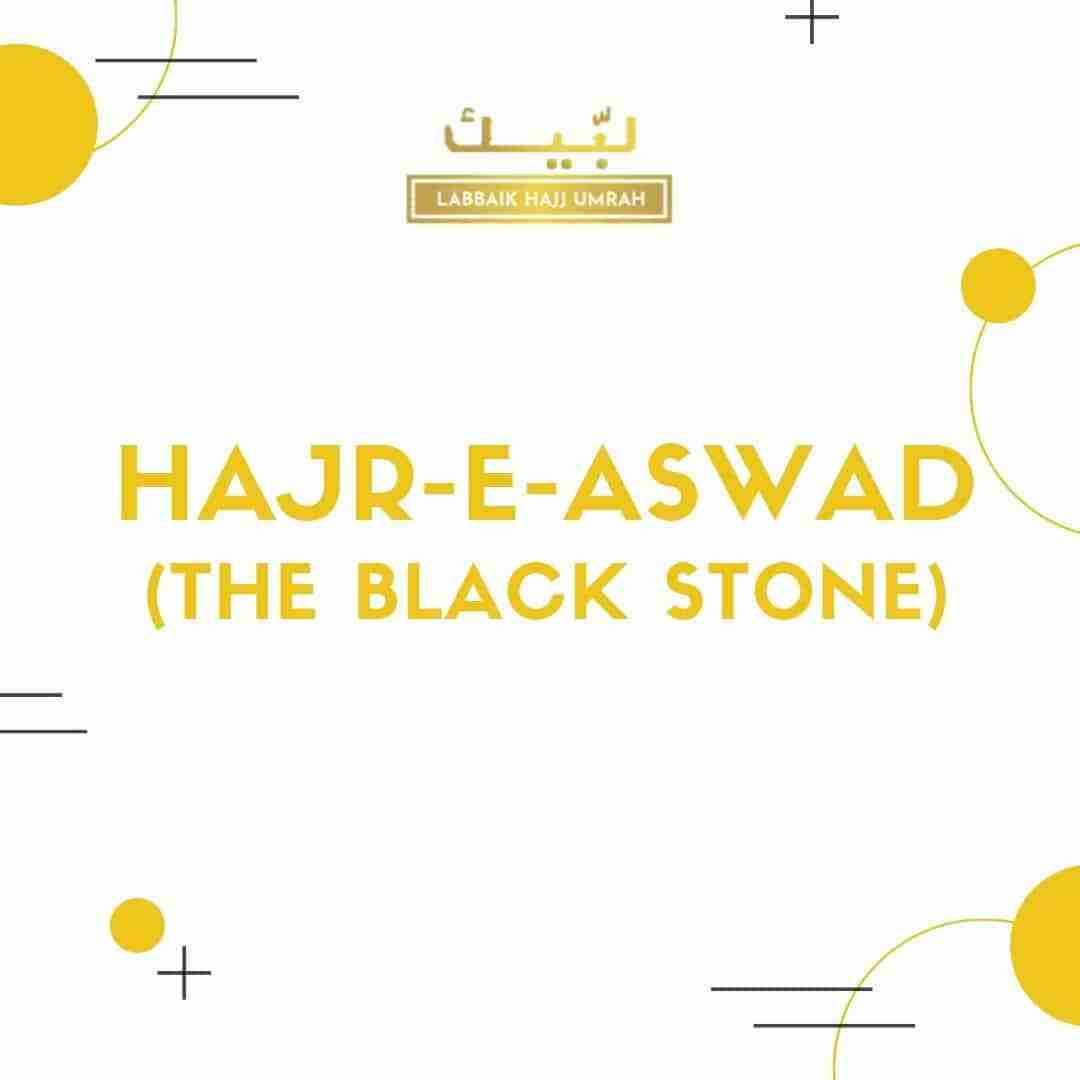 Hajr e Aswad, The Black Stone, is an Islamic relic that is installed on the eastern corner of the Holy Ka’ba.

You might have seen pilgrims kissing, touching or just gesturing towards it while performing Hajj and Umrah. If you have not, you should watch the live coverage of Hajj 2021. Or an even better option, get yourself one of those cheap Umrah packages and experience it yourself.

Did you ever wonder what is the story of this stone and what is its significance? Well keep reading and all your questions will be answered.

There are different narratives about the origin of Hajr e Aswad. One narrative is that it fell from Paradise to show Prophet Adam (A.S) where to build the first house of worship on Earth. 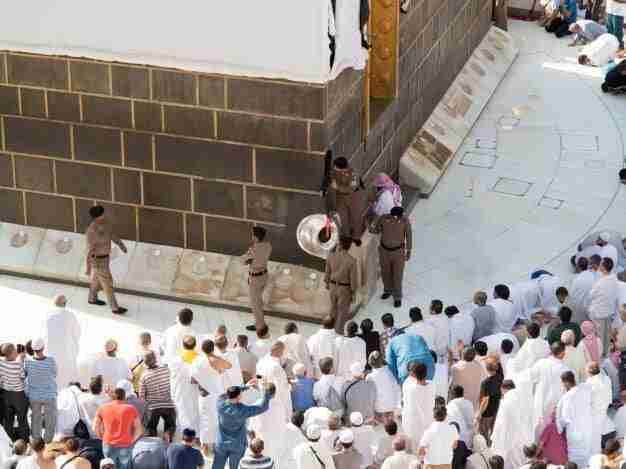 So he asked his son, Prophet Ismail (A.S), to go look for a stone that could fit in the gap. Prophet Ismail (A.S) searched but he could not find any suitable stone. When He returned to his father, He noticed that the gap was filled. Upon asking the Prophet Ibrahim (A.S) revealed that the stone was brought to him by Angel Jibraeel (A.S) from heaven.

Ibn Abbas narrated that Prophet Muhammad (peace be upon him) said:

“When the Black Stone came down from Paradise, it was whiter than milk, but the sins of the sons of Adam made it black.” (Tirmidhi)

While performing Tawaf, it is necessary for Muslims to kiss Hajar al-Aswad (or just touch or gesture towards it). Kissing it does not mean they are paying respect to the stone or praying it. They do so only because it is the Sunnah of Prophet Muhammad (peace be upon him).

There is a misconception among non-Muslims and people who reverted to Islam that Muslims pray to the Stone and it is a sort of idol worship. Hazrat Umar (R.A) did address this issue. He said:

“I know well that you are just a stone that can do neither good nor harm. Had I not seen the Prophet (PBUH) kiss you, I would not have done so.”

It clarifies that the notion that kissing the stone is a kind of idolatry, is baseless. Muslims kiss the stone only because Prophet Muhammad (peace be upon him) did so. 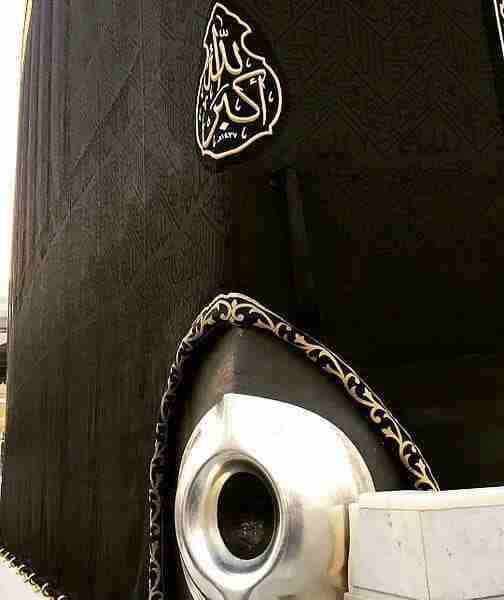 Hajar al-Aswad is a stone from the heaven, a place we all crave for. That makes it quite significant. Moreover, there are several Hadith that tell us about the significance of this stone.

Note: If you want to get the ultimate guide on How To Perform Umrah, check it after clicking.

Prophet Muhammad (peace be upon him) said:

“ By Allah! On the Day of Qiyaamah, Allah will present the Hajar e Aswad in such a manner that it will have two eyes and a tongue to testify to the Imaan (faith) of all those who kissed it.” (Tirmidhi)

On the Day of Judgment, the faith of every soul who has kissed Hajar al-Aswad will be testified by the stone itself. 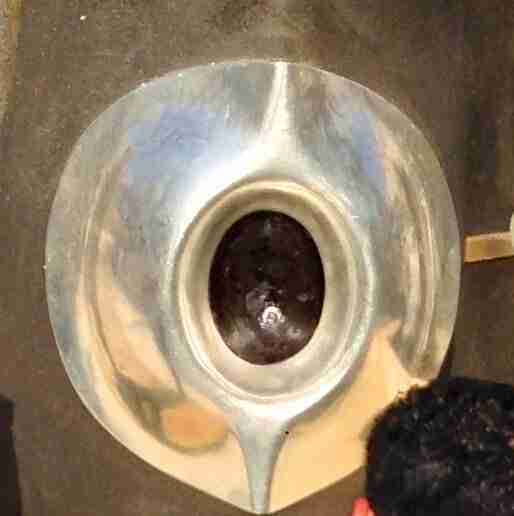 “The Hajr e Aswad and al-Maqam (Ibrahim) are the two jewels from the jewels of Paradise. Had Allah not concealed their radiance, they would illuminate everything between the East and the West.” (Tirmidhi)

This Hadith also states the significance and importance of Hajar al-Aswad.

So this is it, now you know about the origin and significance of Hajar al-Aswad. This is no ordinary stone, it is a stone from heaven and Muslims kiss it because it is a Sunnah.

History of Hajar e Aswad tells us, it was a single stone that was descended from Paradise at the time of construction of Kaaba by Ibrahim (AS) and Ismail (AS). Another heavenly stone was also used to build the Kaaba called Maqam e Ibrahim. But today the physical appearance of Hajr e Aswad physical appearance does not represent as a single stone. This stone consists of several pieces which have been skillfully cemented together.

There many narrations that tell us the number of pieces such as 7, 8,12 or more than. But it is divided into pieces is the correct information.

These cemented fragments are surrounded by a silver frame. If we go to the past in the 10th century. Then observers (Visitors, Hajj Pilgrims and Umrah Pilgrims) tell the Holy Stone as being one cubit (18 inches) long.  By the early 17th century, it was recorded as measuring 4 ft 7 in by 4 ft 0 in.

In the 18th century, according to Ali Bey, it was described as 3 ft 7 in high, and Muhammad Ali Pasha reported it as being 2 ft 6 in long and 1 ft 6 in wide.

Today, the physical appearance of this sacred stone has about 12 inches in diameter and 5 feet above the ground.

An Important Incident before the declaration of Prophecy:

Before the declaration of prophecy, the Black Stone was considered a sacred stone by Makkah’s Pagan tribes. The building of the Kaaba was the origin of pilgrimage where people used to gather around it every year for Tawaf. But at that time it was a special room for 360 idols.

But remember, we do not have any historical evidence to prove that the Hajre Aswad was worshipped when 360 idols were placed in the Kaaba. All the tribes of Makkah decided to rebuild the Kaabah, but when the construction of the Ka’bah reached the point where the Black Stone was to be fitted, all the tribes became thirsty for each other’s blood.

Each tribe thought that is a very big insult of them if they don’t participate in embedding the Hajre aswad. At that time, Banu Abdu‘d Dar brought a pot with full of blood and all tribes’ members inserted their hands.

Abu Umayyah ibn al–Mugheerah, whose real name was Suhail, came up with an idea to stop the civil war, according to which all the tribes would agree with the person who would go through the Bani Shiba gate first and decide which of us is entitled to embed Hajare Aswad in the wall of Kaaba?

Everyone was looking forward to the next morning then All of them seen Prophet Muhammad (PBUH) enter first through the door of Bani Shaibah. And the slogan of Al-Amin has come was raised because Al–Amin and Al–Sadiq both titles were given to Muhammad (PBUH) by Quraish.

Muhammad (peace be upon him) put Hajr e Asad in his robe and said. “Every Chief of the tribe should pick up this sheet from the corner.” Everyone did it as he (Peace Be Upon Him) stated. When this sheet reached the proper height. Then Messenger of Allaah (peace and blessings of Allaah be upon him) took this black stone and placed it in a suitable place.

Story of black stone stolen from the Kaaba?

Abu Tahir al-Qarmati was a Qarmati emperor of the historical and ancient Bahrain. . His brother Abu Saeed Hassan ibn Bahram al-Jannabi was the founding father of the state of Qarmatian. Abu Tahir al–Qarmati became the leader in 923.

His reign saw an expansion. He captured Basra in 923 and Kufa in 927. He also threatened to require over Baghdad and robbed much of Iraq. He wasn’t considered as a peaceful leader.

How was Hajar aswad stolen?

In 930, the Qarmatian head underwent a cruel plan. He planned to attack Makkah. When he first reached the Makkah, he was not permitted to enter. So he took an oath of peace that ensured that he will remain in peace here.

But he failed to keep his oath. What he did wasn’t peaceful in the least. On the absolute first day of Hajj (8th Dhul Hijjah), the Qarmatians assaulted Makkah. The Qarmatians’ army came upon the horses and entered Masjid al-Haram.

They started massacring the pilgrims brutally. The reports indicate that about 30,000 pilgrims were killed as they were praying around the Kabba.

The Qarmatians were insulting the pilgrims with the Quranic verses as they were being killed.

They looted the Kaaba, destroyed the buildings, houses were plundered, slaves were seized and therefore the dead bodies of pilgrims were thrown in the well of Zamzam to despoil it while other dead bodies ones were left on streets to urge rotten away.

Abu Tahir took away the Hajar Aswad and held in his custody. He took it to Masjid al Dirar so it may well be placed there. He wanted to create the Masjid a sacred place and redirect the Hajj from Makkah to Masjid al Dirar. But he never got what he wanted!

He died the foremost horrific death, his body and flesh were eaten away by worms. The stone was removed 23 years later by paying a large ransom.

The Abbasids had to pay a large amount of cash to urge the black stone back. The stone was cracked into seven pieces during its hostage and removal.

Nobody crosses the limit that has been fixed from our Lord. If any did in past then Allah made them a sign for the world. So, we should never cross boundaries. Doing go to Makkah see Kaaba stone with naked eyes is a great opportunity for us. Therefore, we should never miss this chance.