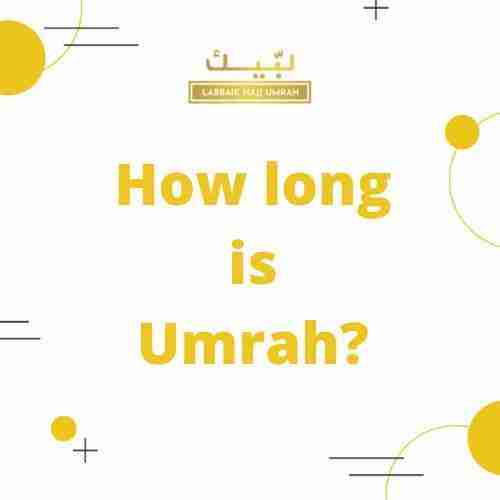 In simple words, Umrah means “to visit a populated place.” According to Muslims, it is an Islamic pilgrimage in Makkah, which is a city of Saudi Arabia. Umrah is also called a lesser pilgrimage because its rituals are less in number than the Hajj rituals. Muslims have to spend 5 special days there for Hajj rituals. Get appropriate information about the Hajj types and rituals here.

In the new era, people are trying to search the new ways to complete the one-year work only in a few weeks. Every day of life is starting with new inventions in this world which are amazing for us. Often people ask how much time is required to complete the Umrah pilgrimage.

How long is Umrah?

Umrah can quickly be done in 4 to 5 hours because its rituals are four which are Ihram, Tawaf, Sa’i, and Qasr (shaving the head or cutting the hair). The last three rituals are entirely performed in Masjid al-Haram except for the Ihram. It can be worn at any Meqat which are selected for upcoming Muslims there.

The asking question is based upon two parts:

Preparation is started from planning in mind when you want to depart from and return to your homeland. This step mainly consists of four things; Umrah visa, Vaccination certificate, Flight tickets, and Hotel Booking.

The first step of any journey is to visit the other country, although Umrah is performed in the city of Saudi Arabia. Therefore, it is essential for this. After implementing the new online Umrah visa, you can get it within 24 hours, but it can take 2 to 3 days in issuing due to other issues.

Visa update policy may bother you but “How long does Umrah visa take?” This title of Umrah Visa can be effective for you.

2 years ago, getting a meningitis ACWY certificate as proof was enough. The whole health consciousness has been changed now. Now no one requires an ACWY certificate rather a PCR test has become essential. PCR means polymerase chain reaction which is considered a highly accurate way to diagnose certain infectious diseases and genetic changes. Getting a PCR test report within 48 hours before landing at the Kingdom’s airport is mandatory. Break the 48 hours’ time frame will not permit you to go to your destination.

Now British inhabitants can get a free PCR test but how they will get it?

Find all confidential details on this link: www.gov.uk/get-coronavirus-test

Immunize against COVID 19 vaccination is the first condition for preparing the Umrah. Which vaccinations are accepted or not for travellers according to Saudi? And has extra booster become an essential step for travellers to Kingdom?

Travel wishers for Umrah can get everything on the Umrah Packages Page of Labbaik Hajj Umrah.

To cover the destination of Saudi Arabia in a short time, people will require direct flights to reach Makkah. For any reason, if you have not found a direct flight, then you should try to get a flight with one-stop or a minimum of two stops. The best closest airport to Makkah is King Abdulaziz international airport which is situated in Jeddah city.

People can easily find private transport at the airport and in this way they can complete this route from the airport to Makkah in only 60 minutes.

A hotel is the best place to stay in any abroad country and city. You will try to book the nearest hotel from Haram, so that, you will easily reach the al-Haram mosque after checking in the hotel for performing the Umrah.

The performance of Umrah is more dependent upon your physical condition. If you are physically fit, then you can efficiently perform in 4 to 5 hours maximum. Performing of Umrah consists of mainly four parts which are offered one by one respectively, Ihram, Tawaf, Sa’I, and Halq or Taqsir.

It is a unique dress for holy pilgrimage. Its shape is different for males and females. Laws for wearing this dress are the same for both genders. Before entering the Masjid al-Haram, you will surely wear it.

There are many points where you can outfit this dress.

You can wear this at home, the airport, and Meqat. You can also wear Ihram during the flight because often captains announce to wear the Ihram. During the flight, you can wear it in the area of lavatory flight which may not be suitable for anyone due to its narrow size. There is an airline that is offering a specific place to offer prayer during flying and you can wear Ihram at this place.

Note: You should always choose such a place to wear it where you may face the low crowd.

This ritual is performed around the Kaaba. Indeed Tawaf consists of seven times walking around the cubic shape building, which is situated in Masjid al-Haram. Time for circumambulating cannot be fixed every time because it may vary sometimes due to the rush of pilgrims and floor.

During the Tawaf, the distance around the Kaaba can range from 1.4 km to 4.1 km. After the circumambulation, offered two rakats of prayers are mandatory.

According to pilgrims, this ritual may be completed in 60 minutes, and it can also take 90 minutes.

During this ritual, seven times walking (back and forth) between the two hills Safa and Marwa which are located in al-Haram mosque. The total distance of seven-time walking between two mounts is about 3.2km, and each walking distance from Safa to Marwa is approximately 450 meters.

You can efficiently complete this ritual in 70 to 100 minutes because it is recommended for women to achieve this ritual with average speed whereas it is Sunnah for men to run on this track.

If you have a razor or scissors then you can shave and cut hair yourself. Their barbershops are located at a very short distance from the al-haraam mosque. This ritual may be done in 1 hour due to the crowd of pilgrims there. But women will not need to go to any barbershops while it can be performed where they are staying in Makkah.

Umrah can be easily performed in a few hours, but this is not a normal place of visiting and it is a spiritual journey.

Prophet Muhammad (Peace Be Upon Him) stated:

“The guests of Allah are 3: the Ghazi, the Hajji, and the Mutamir (i.e. the pilgrim performing Umrah).”

It is the best time for us to get more and more rewards there. We should only concentrate there on our prayers.  If you have been confused to get all things yet, then you can contact Labbaik Hajj Umrah in the UK. We are professionally trained to complete all basics of this spiritual journey. We will also help you to make your tour pleasurable by providing direct flights, closest hotels to Makkah. You can get the Umrah Package at any vacation or whole of year with the help of us.