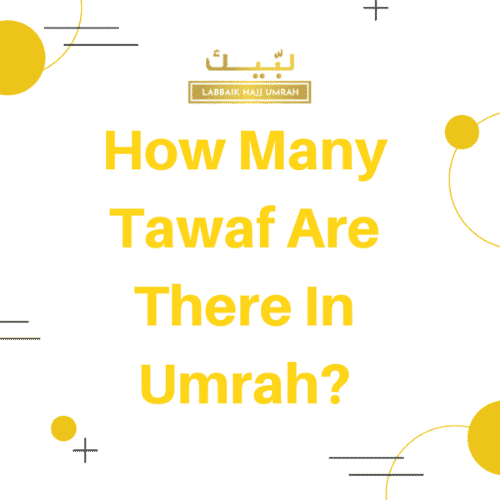 Every Muslim wants to have in-depth knowledge of Tawaf performed during Umrah. Bit of us already know about five types of Tawaf but don’t know which is compulsory and not? Next time when you perform Umrah in 2021 you have to do only one Tawaf.

These different types of Tawaf can be performed in Masjid al Haram.

Number of Tawaf in Umrah:

Not too many but Tawaf-al-Umrah is the only one Tawaf that is compulsory in Umrah. If you didn’t perform it in a prescribed way, your Umrah is incomplete. Here is a complete guide on Tawaf-al-Umrah and how you should perform it during Umrah.

Before starting Tawaf, you must check whether you fulfil the conditions of tawaf or not?

Making an intention separately for Tawaf, Sa’i, and other rituals is a plus, but you can make a single intention of Umrah when you enter in the Masjid-al-Haram. You don’t have to pay any penalty if you did not make niyyah (intention) for Tawaf.

Pilgrim should approach to Hajr–e–Aswad after entering in Holy Kaaba. You should be in facing position toward the black stone before you initiate your Tawaf. Start the Tawaf by kissing the black stone.

If you are unable to do due to overcrowded, you can touch and then kiss your right hand. If you can’t do all of that, you can indicate your right-hand palms towards black stone while standing. After this, you can start your Tawaf in a counterclockwise direction, taking Hajr–e–Aswad as a beginning point.

For men, it is ordered to walk fast (but not running) in his first three rounds and then slow down the speed in remaining four rounds consequently. But women will do it at an average walking rate. It is also discouraged for women to get close to unknown men during tawaf.

You should start your tawaf by reciting “Bismillah’hi Allah hu Akbar”. In all the seven rounds around the Kaaba, you can recite The Holy Quran, any dua from memory, or cry to Allah to forgive your sins. No special dua is recommended for each round.

Once you have completed your seven rounds around the Kaaba as described your tawaf is completed. Now offer two rakats of salah at Maqam–e–Ibrahim, you can also offer this prayer at anywhere in the mosque if you don’t find a nearby place at Maqam–e–Ibrahim.

It is also the great sunnah of our beloved prophet (P.B.U.H) to recite Surah al Kafirun in the first unit of prayer after Surah Fatiha and Surah al Ikhlas in the second unit.

So, next time, when you book your Umrah package in 2021, keep in mind that you have only one tawaf that is a must part of your Umrah. You don’t need to worry about types of tawaf. If you still have any queries, you can contact us 24/7.