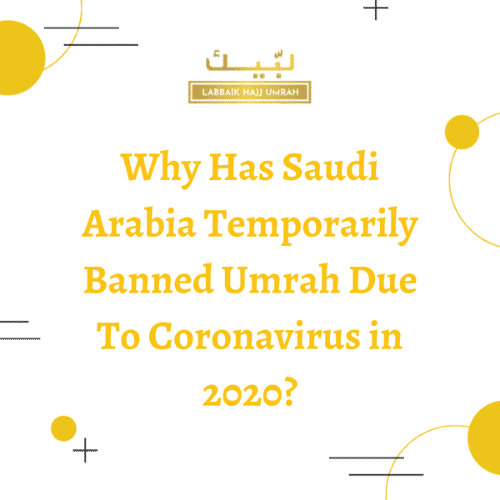 Saudi Arabia suspended the Umrah over fears of the new coronavirus spreading to Islam’s holiest cities (Makkah & Madinah). The announcement of Temporary banned on Umrah was made by the Saudi Ministry of Health at a time when two “maximum reward opportunities” are about to begin. These two opportunities are Hajj and Ramadan.

Saudia banned the Umrah on Feb. 27 due to found a patient of coronavirus. The kingdom on Monday confirmed the first case of new Coronavirus, after which one of its citizens, who returned from COVID-19 hotspot Iran that was diagnosed by this novel virus.

Makkah and Medina have been the pilgrimages (Ziyarah) for Muslims for centuries, but this time the gates of these two cities have been temporarily closed to Muslims. The suspension is not just for other countries, but also for GCC citizens, who are currently under siege.

The Foreign Ministry has also imposed a ban on tourist visa holders for preventing the devastation caused by the spread of the Coronavirus.

Do you know which areas are banned for visitors of both mosques?

Saudi authorities barred people from coming to the holy mosques (Masjid al–Haram and Masjid al–Nabavi) from Fajr prayers to Isha prayers, and they also banned the entry of food supplies into both mosques. The rituals of Umrah are not complete without having to walk between the two hills (Safa and Marwa), but now the place has been suspended. The government has temporarily suspended public access to Zamzam Water dispensaries within both mosques.

What is Corona Virus?

According to medical experts, such type of virus have not been identified in humans in the past centuries. It has come from the biggest trading country that is China. Coronavirus disease 2019 (COVID-19) is a respiratory illness that can spread from person to person & from animal to human and first time it was first identified during an investigation into an outbreak in Wuhan the capital of Hubei province, China.

“WHO” has confirmed that it is zoonotic and this type of disease can spread from animals or insects to humans. Some do not make animals sick but will make humans sick. Zoonotic diseases range from minor short-term illnesses to a life-changing disease and some victims can even cause death.

The following are just a few of the names from “Most killing Zoonotic Diseases”.

How Zoonotic Diseases are transmitted?

These Disease need contact between the affected and the non-affected.

There are many ways to expand these diseases in human beings.

But Coronavirus is more dangerous than others like a common cold, Middle East breathing syndrome, and it acts as an Acute Respiratory Syndrome.

Most common symptoms of this infection?

Common symptoms of Corona are described in a list:

But most catastrophic symptoms are:

How can one protect oneself?

Do we have a vaccine against the coronavirus?

An easy answer is “no”. There is no vaccine to protect humans from COVID-19. The only way to protect yourself is to take everyday preventive actions as described above.

My purpose is not to scare you with the Coronavirus, but to say that Banning Umrah right now is a good idea to save people from this catastrophe.

The state never wanted to take such a step because every Muslim desire to do Umrah, but for that time it was an important step and most people are feeling a little upset and sad that they will able to do this Sunnah in the upcoming days, here upcoming days means Days of Ramadan and Hajj.

Some of them had bought their Umrah packages 2021 from scratch so that they never miss this chance.

If they miss this opportunity, then they should consider that their destiny has created a wall of corona between them and Umrah.

About the Umrah, it is often heard that people can perform Umrah at any time of the year except for Hajj. After Ramadan, the Ministry of Hajj and Umrah does not issue Umrah visas to all countries that are not in the GCC countries but the UK is not included in those countries.

If you do not know much about the correct method of Umrah then you have to click here to get the Ultimate Guide on How to perform Umrah.

From 16th Ramadan to the end of the Hajj month, British residents are forced to think that the word “Umrah ban” is used for them for these three and a half months. They cannot enter the Kingdom during this period.

But nobody expects the word “Umrah ban” to be used in March, but it’s only been caused by a virus.

What did the Sheikh say on Friday about the Umrah ban due to Corona virus?

On 6 March, Sheikh Al- Jihani said in his Friday sermon at the Grand Mosque (Al-Haram Mosque) that protection of lives in one of the great responsibilities of the ruler and he has the authority to assess the risks after consulting with scholars.

Sheikh gave an example from Islamic history that is related to the 2nd Caliph of Muslims- Omar Ibn Al–Khattab (RA.) when he was travelling to the Levant (Al-Shaam).

On the way of Levant, Caliph met with the commanders of the Muslims troops, Abu Obeidah Bin Al–Jarrah and different of Prophet Muhammad’s companions (Peace Be Upon Him).

They all informed Omar (May Allah be pleased with them) that an epidemic had broken out in the Levant. The Caliphs of the time consulted the Companions, but they differed in their opinion.

Then at this moment, Abdulrahman Ibn Owf (RA) came to Omar and said:

“I have some knowledge on this issue. I heard the Messenger of Allah (Peace be Upon Him) saying: If you hear about the outbreak of an epidemic in some land, do not travel to it. And if it occurs at a place where you are, don’t flee from it to another place.“

“The Caliph Omar thanked Allah SWT. and then left.”

This narration of 2nd Caliph is enough to Ban Umrah due to Corona this era. And it is a necessary step to prevent the epidemic Coronavirus outbreak.

Upcoming people in Makkah and Madinah due to Hajj or Umrah are key to revenue for Saudi Arabia. Around two-thirds of the 18.3 million Muslims participants in 2018 were residents and citizens of the Saudia. In 2019, almost 2.5 million Muslims travelled to the Kingdom from across the world, to perform Hajj.

It is a mandatory part of Islam because it is one of five pillars of Islam. It may be a massive logistic challenge of Saudi authorities to manage such a large number of people in Hajj because nobody knows how the coronavirus will affect the Hajj that is coming in late July.

Holy month Ramadan is starting in late April, people have been forced to think would we perform Umrah in Ramadan this year. Death ratio of people warns us that the virus is spreading in the world very fastly.

With thoughts of performing Umrah in Ramadan or to do Hajj, many individuals will also have a thought to do Umrah in March or April due to getting a peaceful atmosphere ( in performing of rituals) and rates of flight and hotels are also less in these moths than the month of Ramadan because it is considered a peak season of Umrah.

Nowadays, Umrah Package seekers have only one question when they contact any travel agent, when will Umrah reopen and what is Saudi Umrah ban update?

Travel agents have the same words in response to such questions that the Umrah ban has been extended by the Ministry of Hajj and Umrah.

If you are concerned about the coronavirus (COVID-19) and want to get PCR test privately to travel,

we are now able to offer you the latest approved tests from fully approved DHSC test centers.