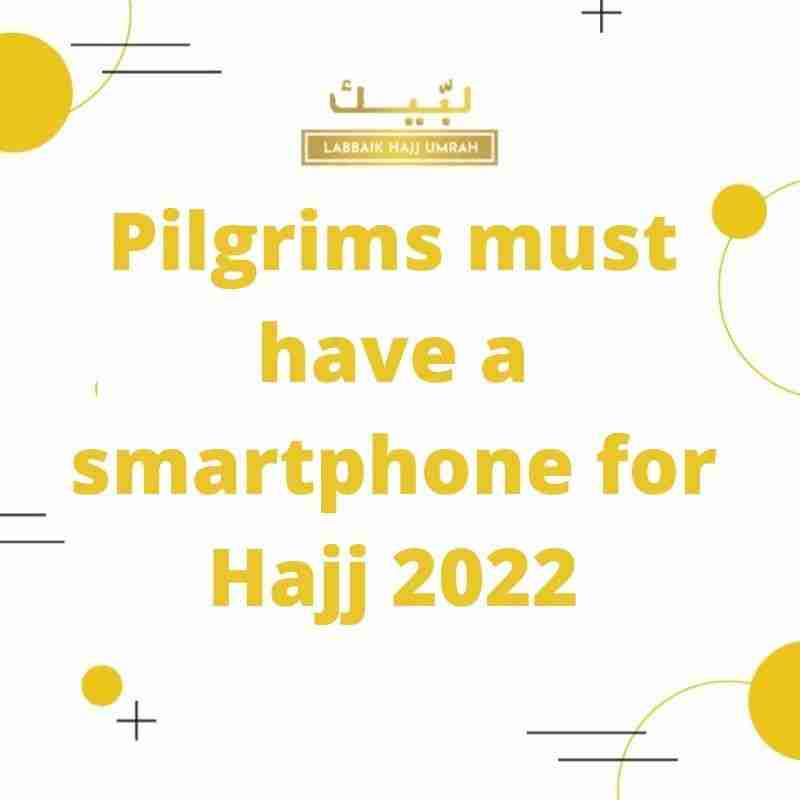 Hajj is a journey that every Muslim has dreamed of since childhood. It’s significant because of its rituals and is one of the five pillars of Islam. Millions of Muslims cover this sacred travel every year during the last Islamic month of Dhu al-Hijjah. The Saudi Government banned the Hajj for International Muslims due to the outbreak of COVID 19.

Two years later, the Saudi government officially announced in April that one million pilgrims will arrive for the 2022 Hajj from inside and outside Saudi Arabia. Saudi state will welcome all Muslims around the world. There are some guidelines for incoming travellers, one of which is the smartphone. Therefore, for Hajj 2022, pilgrims must have a smartphone.

Do you want to know: How many Saudi Arabia announced Hajj 2022 Quota for UK pilgrims?

Pilgrims do not have to buy any expensive smartphones because of significant purpose is to use the Tawakkalna and Eatmarna Apps. So, you can use these two apps on any cheap smartphone.

Should we use our national SIMs in Saudi or not?

Yes, we can use National SIM, but it is better to buy any Saudi SIM to decrease calling and internet charges during Hajj and Umrah.

Individuals under the age of 18 cannot buy Saudi SIMs. Hajj pilgrims can have only two active SIMs in their name.

If buying a Saudi SIM is effective then, where can we buy it in the kingdom? We can easily buy our favourite SIMs at Mobily, Lebara, Zain, STC and Virgin Mobile stores. We can buy it at all KSA International Airports.

Remember, passengers should not use phones that adhere to CDMA technology but should use mobile phones with GSM technology.

Why are our smartphones essential equipment for Hajj 2022?

Before the spread of the coronavirus, mobile phones were not essential for Hajj and Umrah. But, now it has become significant to use both Eatmarna and Tawakkalna apps. A pilgrim will fill in his visa information and health status on these apps, and he will also be allowed to perform Umrah after or before Hajj from these apps.

We cannot use these apps properly in our countries except in Saudi Arabia. Therefore, we should install both apps before departure. If we delay in filling in the required data, we may face some problems during Hajj.

Other Benefits of Smartphones during Hajj

Hajj is a 5 to 6– day journey between Mecca and its environs. During this journey, the pilgrims wear unique clothes (Ihram) and go to all the places where Abraham tried to sacrifice his beloved son (Ismail).

Their journey does not end here but they also go to that place where the Holy Prophet (Peace Be Upon Him) delivered his last sermon and near this place he fought the second great battle of Islam i.e. the Battle of Uhud, During this time Muhammad (peace be upon him) also lost his uncle Hamza. Pilgrims, after performing the ritual of Rami on the 10th, 11th and 12th days of their Hajj, also offer sacrifices of their animals (cattle) in the way of Allah.

So we need to focus on the ways that Islamic law tells us how to perform Hajj. Today, smartphones have completely changed the way we learn. We don’t have to go anywhere to buy a book, especially ones related to our pilgrimage. Because everything is available on the internet, our smartphones are the best way to access the world of the internet.

We can quickly and easily learn the ritual of every Hajj through smartphones i.e. Ihram, Tawaf, sa’i, Qurbani, Rami etc.

During Hajj, a flock of pilgrims move from one place to another on the recommended days. Therefore, due to the rush of pilgrims, one of us may lose our travelling or family companion. If we have a phone we can easily reach them if we get lost there.

Uber is the most used taxi service in Saudi Arabia. If some of you have booked your transport service privately while booking Hajj Package 2022 then you are free from it.

Google Maps is the most used navigator app in the world. People use it to find addresses in their towns and cities. Also more navigators: Apple map app, Whatsapp, Skype, etc. With the use of these navigator apps, pilgrims can easily reach their stay in Mecca.

Some people may find it difficult to trust or use Eatmarna or Tawakkalna apps because they are still unfamiliar with them. Therefore, the best way to deal with any impediment is to contact your relevant travel agent.