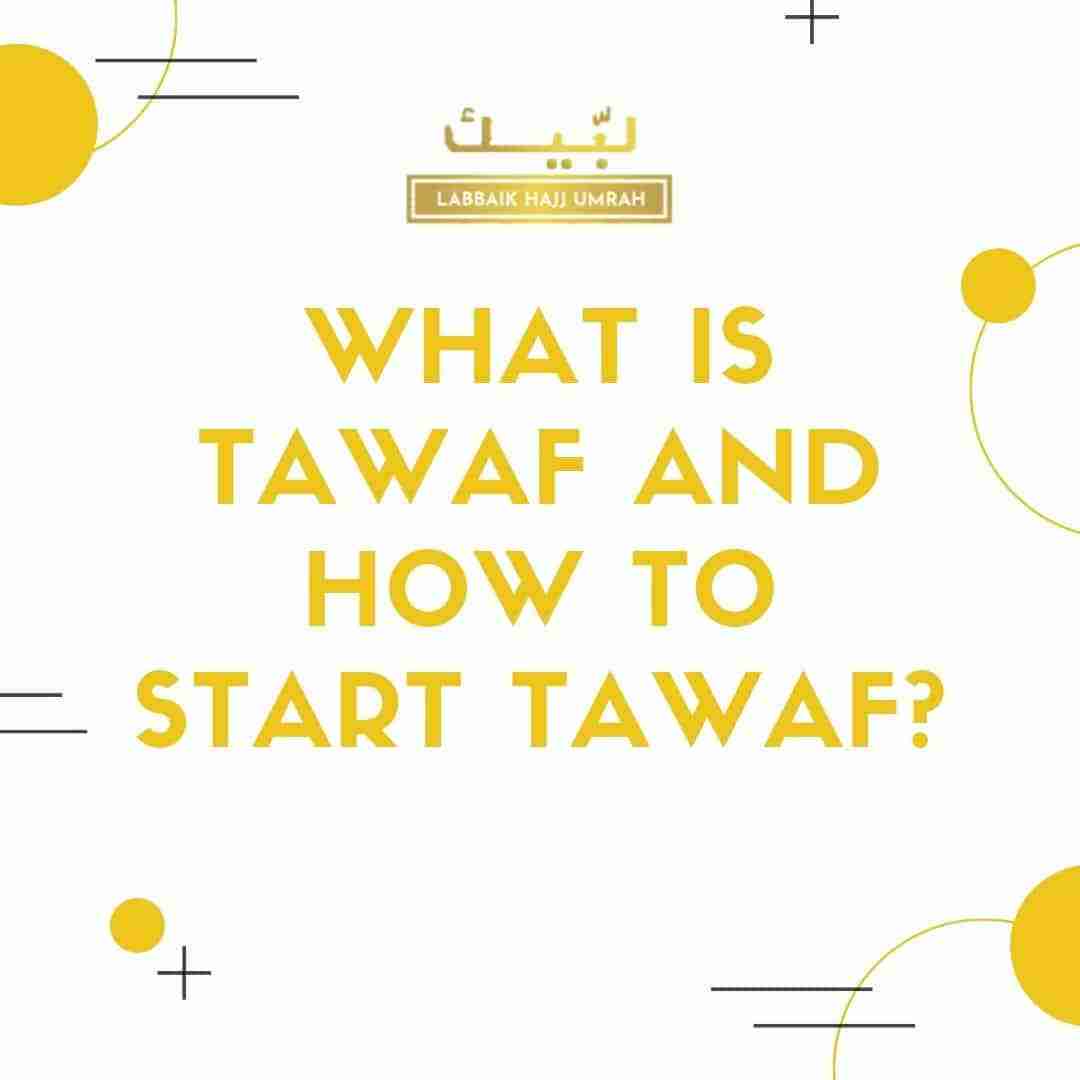 Hajj and Umrah are Islamic obligations that are practised by Muslims from all over the world. Hajj is performed one time in a year whereas Umrah can be done anytime. In both of them,                     Many people are confused about different forms of tawaf and how to perform it. This is a guide to help them understand the deep knowledge and to have a better understanding of tawaf.

Tawaf is walking around Kaaba seven times -in an explicit manner- with a particular prayer. It is the most vital obligation of the Umrah and pilgrimage and without which both Umrah and pilgrimage are incomplete.
Ibn Abbas reported that Allah’s Messenger (PBUH) said that every day, Allah shower one hundred and twenty folds of His mercy on His servants who visit Allah’s home and perform Hajj and Umrah. Just sixty folds of these are specifically for those people who perform Tawaf in a particular manner, forty folds are for those who pray at Kaaba and twenty folds for those who look at the Kaaba. 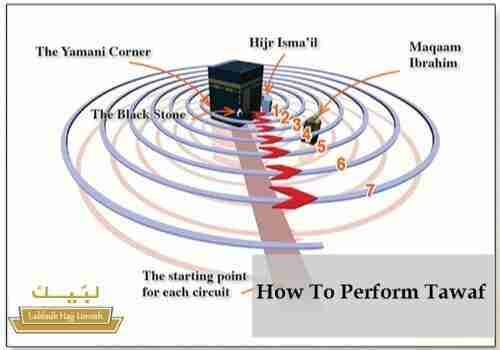 Hence Tawaf is one of the finest forms of ibadah and all Muslims follow it because it is Sunnah to perform Tawaf of Kaaba as a welcome gesture after entering the Holy Mosque. On the contrary Prophet (PBUH) has directed to offer two rakah of salah as a welcome gesture on entering any other mosque. 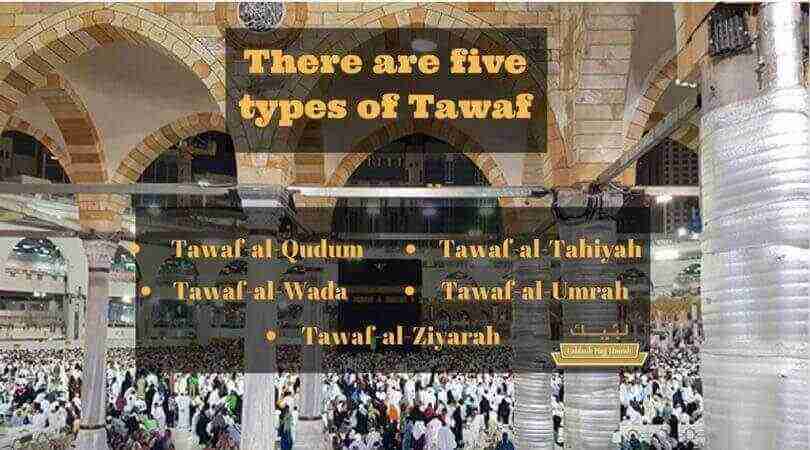 There are five different kinds of Tawaf that one should have known before performing them.
Let us have a brief overview of all types of Tawaf so that the reader can have a better understanding of what is Tawaf.
1. Tawaf-al-Umrah:
This Tawaf is performed by those believers who have decided to perform Tammattu Hajj (for people who are approximately 48 miles away from Mecca and can perform both Umrah and Hajj together). In this tawaf, mahram men are required to perform different Idtiba. The person will wear Ihram and he or she will perform Sai after Tawaf. During Tawaf, men have to do Ramal during the first 3 rounds of Tawaf but women take seven normal rounds of Kaaba.
2. Tawaf-al-Qudoom:
It is a welcome Tawaf and is performed by people who have decided to perform Qiran and Ifrad hajj. For this mahram men are required to perform Tawaf in hajj n umrah. They all will wear the ihram attire. In this type, after Tawaf, Sai will be done by the performers of Qiran hajj and it is optional for performers of Ifrad hajj. Ramal (jog) is required by men to do in the first three rounds of Tawaf and women will complete their seven rounds in the same particular manner.
3. Tawaf-al-Ifada:
It is Tawaf for Hajj. In this Tawaf men and women will walk around Kaaba and complete the seven rounds in the normal particular manner. Usually, it is not in Ihram and people can wear normal clothes. After Tawaf, the Tamattu and Qiran hajj performers will also perform Sai. If Ifrad hajj performers haven’t done it after welcome Tawaf then they will also do it after their Tawaf ends.
4. Tawaf-al-Widaa:
It is the farewell Tawaf and all Tammattu, Qiran and Ifrad hajj performers will do this Tawaf. It is not compulsory to be done with mahram men. Men, as well as women, will take seven rounds in a specific normal way. No Ihram is required. People will wear normal clothes.
5. Nafl Tawaf:
This Tawaf can be performed by all hajj performers whether they are Tammatu, Qiran or Ifrad hajj performers. No mahram is required for this type of tawaf. Men n women will take their seven rounds in the normal particular manner in normal clothes. After Tawaf, there is no need of Sai in this type of Tawaf. 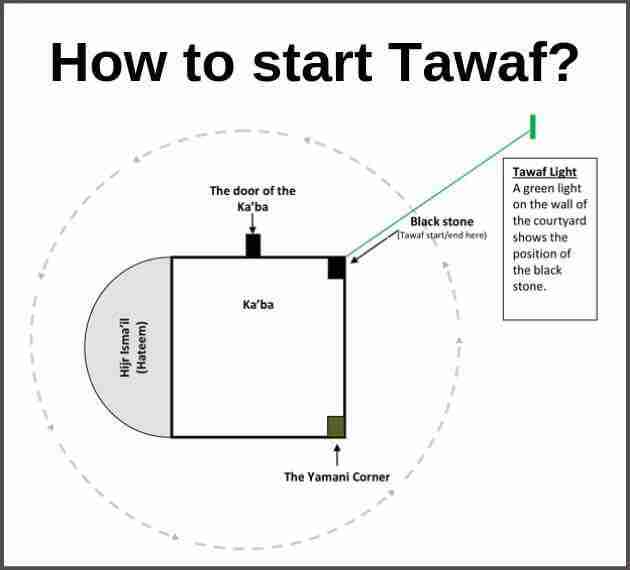 How to start Tawaf?

Before the start of Tawaf when we enter mosque we should recite a few verses. It is Sunnah to enter a mosque with the right foot and then praise Allah n ask mercy from Him. For this, we should recite
• بِسْمِ اللهِ وَ الصَّلاَةُ وَالسَّلاَمُ عَلَى رَسُوْلِ الله
“Bismillahi wassalatu wassalamu alaa Rasoolillahi.”
• أَعُوْبِاللهِ الْعَظِيمِ، وَبِوَجْهِهِ الْكَرِيْمِ، وَسُلْطَانِهِ الْقَدِيمِ مِنَ الشَّيْطَانِ الرِّجِيْمِ، اللَّهُمَّ افْتَحْ لِىْ أبْوَا بَ رَحْمَتِكَ
“A’outhu billahil-a’adtheem, wa bi waj’hihilka-reem, wasultaanihilqadeem, minashaytaanir-rajeem, Alhamdummaftahlee abwaabarahmatik.”
Now the performer should go straight to the Hajr-e-Aswad (the black stone). A green light on Kaaba will indicate its position. It is said to kiss the stone or touch it n then kiss the hand. But if due to the crowd, it is not reachable, then it has been asked to face the stone from Tawaf line the gesture with performer’s hands raised up towards the stone. In this case no need to kiss the hands.
Now proceed anti-clockwise and say Bismillah wallahu akbar. during tawaf, one can recite the Quran or pray in Arabic or any other language. Try not to enter Hateem area other the round will not be valid. According to the type of Tawaf, men and women will complete their seven rounds (the options of Ramal and walk in every type of Tawaf has been explained above). When during the round we reach Rukn-al-Yamani corner, we should touch it and say Bismillah wallahu akbar. But if it is not in reach and we are moving at a higher level then no need to touch or kiss. Now from Rukn-al-Yamani corner to the black stop, it is Sunnah to recite:
رَبَّنَا آتِنَا فِي الدُّنْيَا حَسَنَةً وَ فِي الآخِرَةِ حَسَنَةً وَقِنَا عَذَابَ النَّارِ
“Rabbana aathina fiddunyaa hassanatan wa fill aakihirati hasanatan wa qinna athabannar”
Once the performer reaches the Hajr-e-Aswad, it means one round is complete. Either kiss or touch the stone if it is in reach otherwise the hand gesture from far away will do. Repeat the same steps in all seven rounds and the Tawaf will get completed. The men can now cover their uncovered right shoulders. Now the performer should reach Maqam-e-Ibrahim and stand in a way that it is between the performer and Kaaba. Now recite

Now offer two rakats of salah as it is sunnah to recite Surat ul Kafirun in the first rakat after Surat ul Fatiha and Surrat ul Ikhlas in the second rakat after Surat Fatiha. If it is peak time and due to crowd no place near Maqam-e-Ibrahim to offer prayers then one can offer anywhere else in the Haram.

You would love to read our Frequently Asked Questions about Umrah packages. It will help you know more about your Holy trip.